Making the Best of Orlando issue was probably one of the most extensive projects I have worked on to date. A lot of planning, prep and design work went into bringing this issue to life. It's a process that actually starts WAY in advance (and I'm talking around, oh, February or so when voting begins). Once votes are tallied, we have to start thinking about the issue, the theme, and how we're going to approach the visuals...

Some time back, our former Creative Director, Jenifer Kresge, and I began brainstorming about the theme. We were both inspired by a Best-Of issue from Hour magazine involving a very elaborate circus concept, and loved how the photography and theme was carried throughout. Knowing we wanted to do something more colorful and conceptual than our Best Of from last year, we began researching possibilities. But, where in Orlando could we find an appropriate venue, let alone the variety of performers and types of acts that were needed? I immediately thought of Treasure Tavern.

Treasure Tavern is a variety dinner show with a pirate/vaudeville-ish theme that's located adjacent to the Pirate Dinner Adventure on I-Drive. The show includes everything from acrobats to magicians, poodle performers and more. They rotate their acts every so often, so you'll get to see something new each time. I had the pleasure of seeing the show some time ago (thanks, Groupon) and I remembered that they not only had a great stage setting but a colorful, diverse cast and props as well.

Treasure Tavern were more than receptive to being featured and open to just about anything we wanted to do. They invited a few of us down to see the current show so we could get a better feel of what they could offer in terms of performers and set. Needless to say, I took a LOT of notes that night and had a ton of ideas by the time the show was over.

I sat down for some creative brainstorming with the Editor and Photographer and we determined what types of shots we wanted to do. The Best-Of list is comprised of several master categories and a slew of award categories, so we tried to theme most of the shots based on those list items. Our goal was to have at least 1-2 shots encompassing each master category, and if there was time and room on the page, secondary shots as well.

With a general shot list in mind, I began drafting the schedule and call sheet. Let me just say that this was one of the most complex schedules that I have had to put together in a long time. I haven't had to organize anything this complicated since my film school days at Valencia. The day had to be pretty planned out so that certain cast members were able to be released when we were done with them. Each shot also had to have detailed listings of props, set dress, and so forth. It's good to have a least some sort of visual in mind, including what orientation you want the scene shot in, but it's important to remember that not everything is going to go as planned. No matter how well-planned the schedule and shots are, there is always going to be some improvising the day of.

The day of the shoot went extremely well. We were a bit delayed getting started, but that sort of thing should always be expected. The entire Treasure Tavern cast and corporate employees were extremely accommodating (lunch was AMAZING... best photo shoot lunch I have ever had). Todd Feren, the production manager who also plays Robb, had lots of great ideas and it was a very enjoyable, collaborative experience. We even had time to take lots of fun, secondary shots, which ended up being much needed in the layout. Again, those weren't planned, and it's the type of collaboration and improvisation that just naturally happens on a shoot. Overall, it was one of the most fun shoots that I have been on (and a record-breaking day for "that's what she said" jokes). 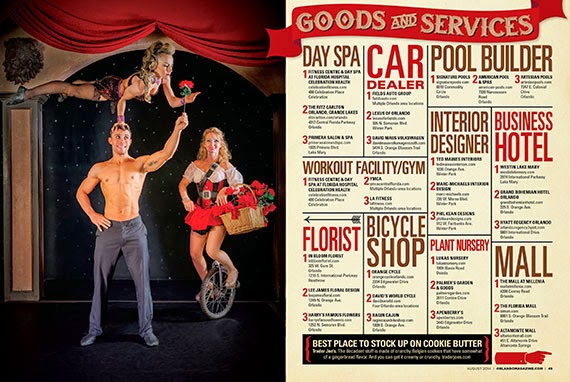 For the design of the issue, I was really inspired by some old vaudeville playbills that I saw on Pinterest. I used an aged paper background to give it a slight vintage look, accompanied by tall, skinny type, accented with red banners. For the photos, we didn't have to do a ton of editing; I mainly just darkened the stage so the scuff marks weren't so prominent. The photographer always does some minor edits and fixes before they are delivered to art. 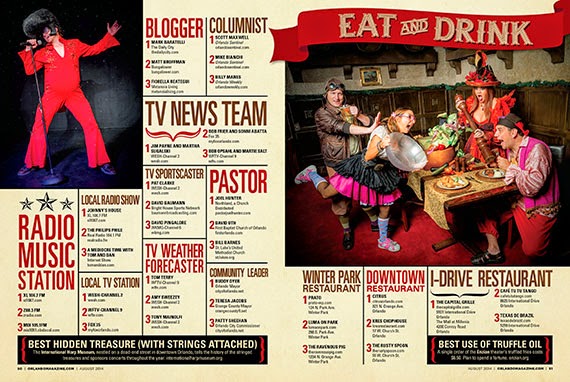 I had wanted to do something different with the text, rather than the typical list approach. It was definitely one of the more ambitious layouts that I've done; each award was in its own text container and had to be manipulated independently of the others. On one hand, it made edits easy, but just getting everything to fit in the first place felt like it took FOREVER. Overall it took me about 3 full days, give or take. I would have loved to have spent more time customizing and texturizing the type, but I quite literally ran out of time. Deadlines, ya know?

You can see the full feature in my Behance portfolio. Be sure to pick up a copy on newsstands at most Publix's and Barnes & Nobel's between now and the end of August. You can also download the complete digital issue for only $.99, viewable on desktop and mobile devices.

And check out our quickie promo video below, shot by our photography intern, Danielle Tauffer, and edited by former Orlando magazine intern and Valencia alum, Fred Mullins.